They may refer to the country as the tear drop of India because of the small land mass and population but Sri Lanka is an amazing island with rich culture and ancient history.

Sri Lanka in blessed with landscapes, wildlife and lots and there have been some remarkable sites designated by UNESCO as world heritage sites. The country has 8 world heritage sites of which two are natural (Central Highlands and Sinharaja Rain Forest Reserve) while others are cultural. 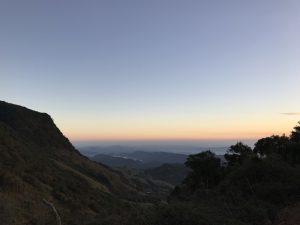 This is the most recent addition to the list of world heritage sites; the central highland is a mixture of wet grassland and highland forest.

Central Highlands comprises the Peak Wilderness protected Area, Knuckles Conservation Forest and the Horton Plains National Park. With extra-ordinary range of flora and fauna including majority of endangered species, the Central Highlands was named a World Heritage site in 2010.

More than half of Sri Lanka’s endemic vertebrates, half of the country’s endemic flowering plants and more than 34% of its endemic trees, shrubs, and herbs are restricted to these diverse montane rain forests and adjoining grassland areas.

The highland is home to several endemic species of mammals like the slender loris, Sri Lanka Leopard and the western purple faced langur, and it is also a biodiversity hotspot.

Tip: January to April is the period when the central highlands are always cool and dry. 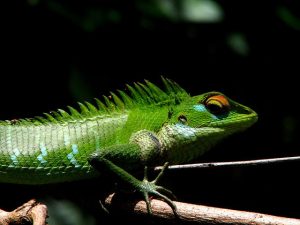 Sinharaja is the country’s last remaining relatively undisturbed remnant of tropical humid evergreen forest in Sri Lanka. Similar to the Central Highlands of Sri Lanka, this World Heritage site is home to more over 50% of Sri Lanka’s endemic species of mammals and butterflies, as well as many kinds of insects, reptiles and rare amphibians. More than 60% of the trees in Sinharaja are endemic and many of them are considered rare.

The flora is a relic of Gondwanaland and provides an important component to human scientific understanding of continental drift. Named a UNESCO World Heritage Site in 1988, Sinharaja is visited only by a handful of enthusiasts and more frequented by research teams and photographers since it is an outstanding site for the study of the processes of biological evolution. 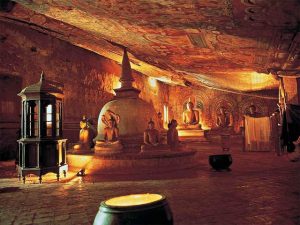 Golden Temple of Dambulla which is also well known as Dambulla Cave Temple is the largest, best-preserved cave-temple complex in Sri Lanka believed to have been built the 1st Century B.C. It was designated as a World Heritage site in 1991.

There are five caves in the temple. All these caves consist of Buddha statues of various sizes and positions. The Buddhist mural paintings (covering an area of 2,100 m2) are of particular importance, as are the 157 statues. The early paintings of Dambulla are believed by some to belong to the 8th Century A.C.

The temple is composed of five caves of varying sizes and magnificence: Cave of the Devine King, Cave of the Great Kings, Great New Monastry, Western Temple. The 5th Cave is more a recent construction.

Today, the cave temple is visited by buddhist pilgrims as well as history buffs to get a glimpse of the amazing statues and the historic murals.

Old town of Galle and its fortification (1988) 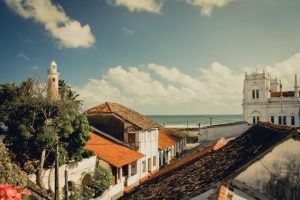 Home to the Portuguese in the 16th Century, Gale reached the height of its development in the 18th century, before the arrival of the British. It is the best example of a fortified city build by Europeans in South and South-East Asia, showing the interaction between European architectural styles and South Asian traditions.

Named a World Heritage site in 1988, Galle fort today is again a greatly preserved locations in Sri Lanka and probably the world. Its new world charm with the little street side cafes of fusion cuisine and art combines heavily with the architecture that remains from the 15th Century.

Being on top of the fortress walls at dusk is the perfect time for you to see the old town. 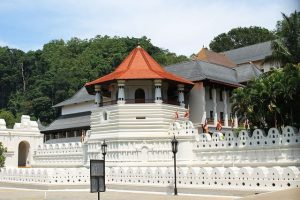 Kandy is now best known as the location of the Annual Tooth Relic Procession, a festival that dates to the fourth century, when the relic, which is said to be a tooth of the Buddha, was brought to Sri Lanka. Every year, five religious’ institutions of the Theravada, Mahayana and Hindu faiths produce an elaborate nighttime procession through Kandy that includes 100 elephants and 5,000 drummers and dancers as well the procession of the Tooth Relic.

Kandy was added to the World Heritage list in 1988. Surrounded by the Mahaweli river on the north, east and west, and by impassible mountain to the south. For this reason, all traffic through this part of Sri Lanka must pass through the city.

Having established itself as a focal point of reference in the country’s legendary colonial history, Kandy has preserved the ancient traditions, religious activities and cultural events. Paying homage to one of Buddhism’s most sacred objects, the Temple of the Tooth has its own significant history. As far as the legend goes, the tooth was taken from Lord Buddha as he was placed in the funeral pyre and was later smuggled to Sri Lanka in the year 313 AD, where it was concealed in the hair of Princess Hemamali, who escaped from the Hindu armies in India who were besieging her father’s kingdom. The Temple of the Tooth was built between 1687 and 1707 under the supervision of the Kandyan Kings, and when the capital was moved to Kandy, the Tooth was taken there and preserved in the temple. 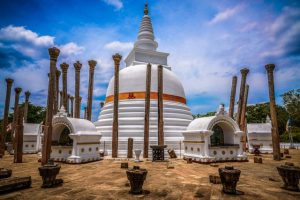 Referred to as the center of islands’ Buddhism and the root of ancient Sri Lankan civilization is the sacred city of Anuradhapura. Named a UNESCO World Heritage site in 1982, was established around a cutting from the ‘tree of enlightenment’, the Buddha’s fig tree, brought there in the 3rd century B.C. by Sanghamitta, the founder of an order of Buddhist nuns.

Anuradhapura, a Ceylonese political and religious capital that flourished for 1,300 years, was abandoned after an invasion in 993. Hidden away in dense jungle for many years, the splendid site, with its palaces, monasteries and monuments.

Anuradhapura is home to worlds oldest tree (2,250 years). It has never since been without its hereditary attendants and care, to the very end, of the country’s kings. As lately as the reign of King Keerti Sri Rajasingha, a wall was built around the tree. In 1066 it was enclosed with a golden railing.

The monuments preserved to date in Anuradhapura date back millennia’s and are frequented by pilgrim visitors from Around the world for its significance to the Buddhist History. 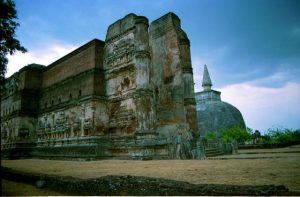 Polonnaruwa was the second capital of Sri Lanka after the destruction of Anuradhapura in 993. Polonnaruwa, Sri Lanka’s splendid medieval capital was established as the first city of the land in the 11th Century, A.D. Three kings (Vijayabahu, Parakramabahu the Great and Nissanka Mala) dominate the chronicles of the city and the period.

Much like the ancient city of Angkor in Cambodia, being able to walk relatively freely through the ruins, temples and shrines is an incredible way to take in the history and heritage of the country and imagine what it must have been like in its heyday. Best known for the work done by King Parakramabahu in 12th Century A.D. today, Polonnaruwa is a UNESCO world heritage site that preserves a lot of monuments and other constructions build in his era and later.

The religious monuments attract a lot of Buddhist pilgrims each year. Sites such as Rankot Vihara, the largest stupa (Pagoda) in the city is about 180 Ft. Hight. Kiri Vihara another stupa rediscovered during the 19th century, surrounded by dense forests. 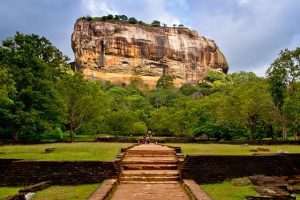 According to inscriptions found in the caves which honeycomb the base of the rock fortress, Sigiriya served as a place of religious retreat as far back as the third century BC, when Buddhist monks established refuge in the locale. It wasn’t until the fifth century AD, however, that Sigiriya rose briefly to supremacy in Sri Lanka.

Rising dramatically from the central plains, the enigmatic rocky outcrop of Sigiriya is perhaps Sri Lanka’s single most dramatic sight. Near-vertical walls soar to a flat-topped summit that contains the ruins of an ancient civilisation, thought to be once the epicentre of the short-lived kingdom of Kassapa, and there are spellbinding vistas across mist-wrapped forests in the early morning.

Sigiriya refuses to reveal its secrets easily, and you’ll have to climb a series of vertiginous staircases attached to sheer walls to reach the top. On the way you’ll pass a series of quite remarkable frescoes and a pair of colossal lion’s paws carved into the bedrock. The surrounding landscape – lily-pad-covered moats, water gardens and cave shrines – only add to Sigiriya’s rock-star appeal.

Remember: visiting these cultural sites require a certain amount of self-discipline. Considering some of them are located in the dry zone where the heat reached up to 38 Degree Celsius, you are still required to dress to cover and barefoot when visiting some locations in respect to their religious and cultural value. 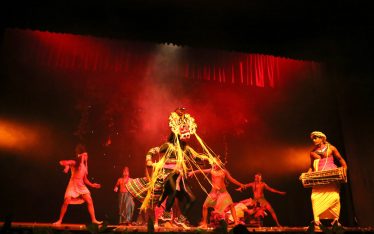 Things to do in Colombo
Colombo is a great place to start a Sri Lankan tour. It became an attractive tourist destination that attracts tourists from all over the world. It is a big and...
100 Likes

It is with great delight that we inform you that Esna Holidays has commenced operations once more!

In the past two months, we’re certain you would have faced immense difficulty in being unable to conduct your business and family lives as normal. We hope this finds you safe and sound.

As the entire globe slowly emerges from the current health crisis, it is heartening to see the measures that have been taken by the Sri Lanka Tourism Development Authority (SLTDA) as well as the country’s major travel companies. We’ve described in detail how Esna Holidays ensures safe tours during this period, in a shared link “ Esna Holidays Health and Safety Procedures & Guidelines “. We would appreciate it if you can go through the brief procedures and guidelines and get back to us if there are any clarifications required.

A lot of effort has been put in country-wide, from the airports, transportation facilities, hotels, tourist sites, police and forces, medical personnel, sites and attractions, to tour operators and travel agencies,to ensure the country can be opened to the outside world in a safe manner, to display the island’s distinct charm once more. Travel has tremendous potential to heal lives, as it can revive the livelihoods of our country’s people while lifting the spirits of all our guests to the island. Therefore, we’re taking our responsibility even more seriously.

We look forward in delivering a healthy & safe travel plans and tours!

No minimum number of days is required for a stay.

All facilities of the hotel would be made available to the guests.

Tourists may visit up to 14 approved tourist sites under the safety of a bio-bubble.

Tourists must stay at a certified ‘Safe and Secure’ Level 1 hotel for upto 14 days of their stay.

Pay for PCR Tests ( 40 USD per PCR test depending on the number of days of the stay) when applying for visa online and for insurance (12 USD) with one month cover of 50,000 USD.

Currently no exceptions would be made for vaccinations taken; all safety protocols should be adhered to regardless.